Gold is ground zero in the title I got from thinking about Exter’s Pyramid. John Exter (September 17, 1910 – February 28, 2006) was an American economist, member of the Board of Governors of the United States Federal Reserve System, and founder of the Central Bank of Sri Lanka.

His original graphic is reminiscent of a packet of Camel cigarettes.

Exter’s Pyramid visualizes the organization of asset classes in terms of risk and size. In Exter’s scheme, gold forms the small base of most reliable value, and asset classes on progressively higher levels are more risky.

The larger size of asset classes at higher levels is representative of the higher total worldwide notional value of those assets. While Exter’s original pyramid placed Third World debt at the top, today derivatives hold this dubious honor.

His Pyramid has also been extended from the abstact claims into tangible assets. Gold rightly crosses the threshold from virtual to physical.

Various people have endeavoured to update the Pyramid with dollar values. Zerohedge probably has the most accurate.

The crypto currency guys have also had a shot at modifying the Pyramid. Correctly they still show gold as money and specie.

The high-speed, low friction digital currency based on the block chain is shown as an alternative to the current central bank system. 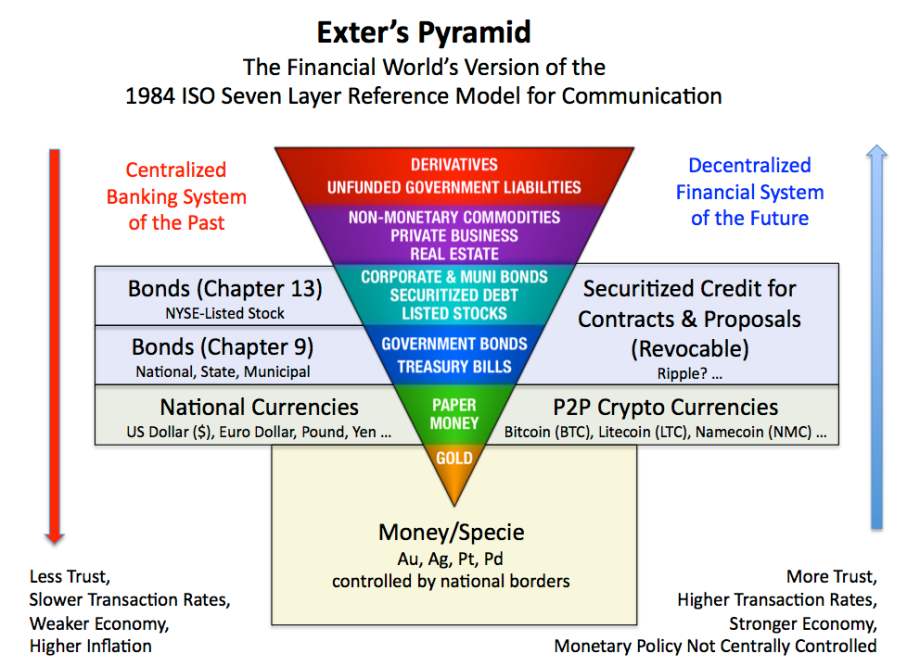 Brett Scott explains it nicely in a piece titled “what is money.”

“Because really, it’s not like most money claims take the form of physical notes any more. Most are data entries, binary code imprints on hard drives of computers within data centres controlled by commercial banks. The act of creating and moving monetary claims around in such a system is the act of editing databases.”

I’ll close with this

All Paper is STILL a short position on gold FOFOA